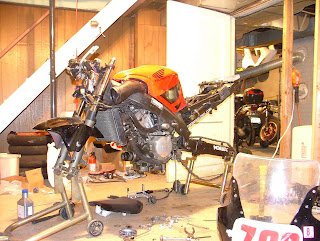 aaaack! That's right, after sitting all of 2009 out, it was time to get back to business. The overarching plan has been to rebuild the trusty old F4i and contend in CCS's Mid-Atlantic region -- no more Loudon for a little while. In some ways, I have temporarily accepted defeat embodied by New Hampshire rain and a seemingly endless streak of mishaps on the tight and bouncy Loudon circuit. It was time to try something else.

This spring saw a dash of activity in my garage, as the engine went in the frame and boxes of parts kept coming in the mail, seemingly every other day. The motor had a new head, forks got revalved, and all manners of little odds and ends got replaced all over. The bike was getting a new lease on life, or so it seemed.

A track day was scheduled at New Jersery Motorsports Park's Lightning course. Idea being to shake down and issues with the bike, learn a new track, and just generally refresh the track part of my brain. My crew for the day consisted of Alix' cousin Tim (cousin-in-law?), who proved to be a helpful hand during the weeks preceding the event. On the morning of the event, the conditions looked to be perfect, the sun was shining, reflecting in the newly repaired and painted bodywork and fresh slicks. The day was full of promise.

Sadly, the day got cut short. As I came out into the first session of the day, the bike was fully warmed up, but sounding a little on the rough side. It appeared to have full power though and I focused on learning the track. A first session at a new place is always a bit of controlled chaos. I managed to get around the lap with minimal drama (all the while missing just about every single apex) and headed onto the front straight, giving the bike a chance to stretch its legs a bit. This went fine, all vitals appearing normal. As the second lap was drawing to a close, I downshifted just before the final section -- a long right-hand sweeper with lots of positive camber. Just as I did so, a "clunky" noise appeared to emanate from the bike and all went quiet -- no power, no nothing. I looked back and there was a rider behind me. I raised my arm and got the hell off the track. Half-heartedly, I pressed the starter button to see if it would fire -- nothing. At that point I figured it was best to leave it alone until Tim and I could look at it in the pits.

Nothing seemed out of place, except the battery was low. At that point, the working theory was maybe the battery malfunctioned (it was a couple years old and not well maintained) and the computer shut off when the voltage dropped. We managed to find a battery at a local auto parts store that could fit, filled it with acid, charged it and put it in the bike. By this time, half the day had gone by. First session after lunch came up and we fired up the bike. It idled -- charging system seemingly working -- and came up to temperature. We took it off the warmers and stands and I rode it to the tech garage for a post-off-course-excursion tech inspection. As soon as I rode away, unbeknownst to me, plumes of white oily smoke started coming out of the exhaust. All I knew at that point was that the bike was sounding a bit rough. As I shut it off in front of the tech garage, some people came up and let me know what they saw. Tim showed up quickly thereafter and confirmed their reports. I looked down at the oil sight window and saw that we just burned a good quart in about a minute -- no good. Our day was done. There was oil seeping out of every join in the pipe and the tip was coated with oily residue.

All we could do was pack up and go. It was early enough in the day, that we were able to bring the bike to CycleTherapy in Manhattan. At the time of this writing, the bike is in their care, awaiting a possible engine replacement (depending on what it turns out to be).

Despite the lousy outcome, a lot of things went a lot better and smoother than they could have. Most of that, can be attributed to Tim coming along, working in the garage despite his work schedule and showing a lot of enthusiasm and ability to learn. I wish he wasn't moving, as I'd love to have him by my side at race time.