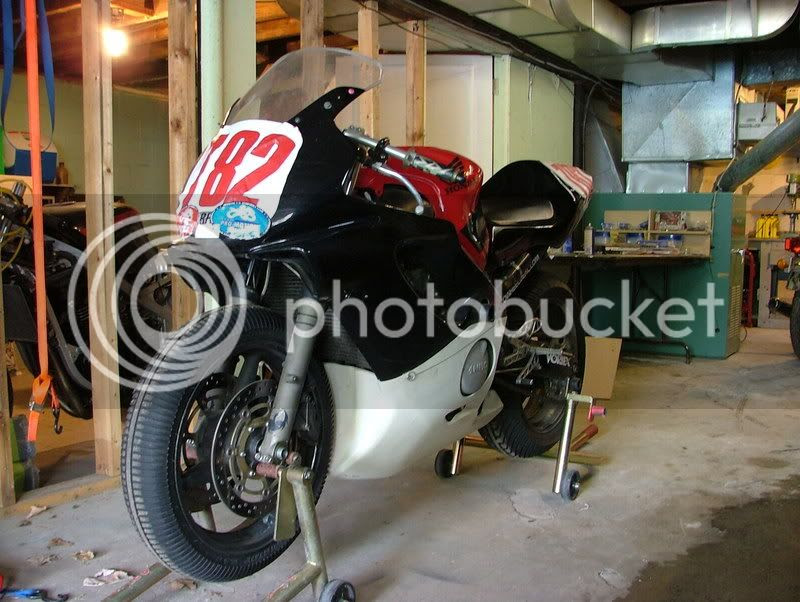 This has been unannounced on purpose. I wanted to take the first
step and see how things went before speaking up and committing myself
to it. Here's the deal: Aron and I are going to try our hand at our
first endurance event with WERA in August at Summit Point. The plan
is to use my F4i, add at least one more rider, get some extra spares,
go to the gym more, and see what happens.

Of course, that's not the only thing we'll be doing. We need some
prior track time. Until now, I had no experience with Summit Point
and Aron had been off modern bikes for some time, concentrating on
his vintage racing effort. So we organized our first “test”
day as a track day, where we were allowed to share the same bike.
Alix and I got there Sunday (4/20) afternoon, after Aron had raced
there that Saturday, adding 2 wins to his resume and improving his
own lap record on the new pavement. Unfortunately, starting Sunday,
the rains had moved in and it didn't look like Monday was going to
clear up for us.

That meant that we could not go out on slicks, the speeds would
obviously be down, so the gearing I had calculated previously was not
going to get tested, and of course neither one of us would really be
able to put any load on the bike to see how the suspension and
chassis geometry was working. So that morning, we unloaded and
teched the bike in the middle of relatively persistent drizzle and we
resigned to just putting in some laps on full rains and take whatever
the day would give us.

On our first outing, Aron and I came out together: I took out the
F4i and Aron unloaded his vintage racer (1963 Ducati 350 single).
Due to the rain, I thought it might be possible for me to follow him
around while I learned the track. We were allowed to do this in the
intermediate group. Summit Point is a nice flowing circuit with 9
(?) turns and not a whole lot of elevation changes (certainly nothing
like Loudon). Being on full rains and with the presence of several
straightaways of considerable length, I decided to get ahead of Aron
and give it a shot on my own. By the end of the session, I felt like
I at least knew which way the track went, not concerning myself too
much with shift points, since I knew it was all going to change
eventually. To me, the most fun points of this track are the long
straight (god, I missed being able to open up a 600 ever since we
moved away from California with tracks like Thunderhill), and the
section that follows it: a tight right hander that opens up, allowing
the gas to be dialed in fairly early and the bike to drift out to the
outside, and then a momentary slow-down for a left hander that in the
dry allows you to get on the painted section on the exit as you crest
a little hill and then run the bike in on the brakes into a pretty
tight series of esses. I've seen a few onboard videos of fast riders
being able to experiment with the lines going into that last part
quite a bit for the sake of making a pass and it looks like it'll be
a lot of fun. Obviously, we were exercising some restraint when it
came to passing due to the conditions and the fact that it was a
track day. In the fast group, people were quite a bit more
predictable and initially Aron and I had some difficulty keeping up
the pace, but as the day wore on, we both began to settle into a nice
groove.

By the time, we did our last sessions, a lot of people had packed
up early and the riders were pretty spread out. In fact, my own
final session started out with me doing one or two laps being the
only bike on track. It was kinda fun, seeing the track marshal at
the entrance get on the radio and probably say, “one bike on
track” and wave me on – I got to pretend like we were
doing our own event and running the show. Aron made good progress
too, having adopted to shifting with his left foot again and being
able to anchor his upper body on the bike. He said he really enjoyed
riding the fast and heavy beast (his 350 tips the scales at about 200
lbs – roughly half the weight of the F4i).

We're currently in the planning stages for another test. We're
not sure if it'll be a track day or we'll work it into practice at a
race event. I myself need to do the paperwork to get my WERA
license. And we still need to find a 3rd rider. Aron's
been asking and getting a lot of interest, but no definite commitment
just yet. This is really exciting and I can't wait to get out-there
again.