Alexey's Log
Wednesday, June 21, 2006
6/16-18/2006 @ NHIS: no result
I'm sorry to report that this weekend, which was supposed to be the biggest weekend of the season for me, ended as fast as it started. Thursday morning, I signed up for a full day of testing in the fast novice group. In the first session, the bike felt a little twitchy. I pulled in and tightened up the steering damper. When I came out, I caught the last few laps of the session and saw that the bike was working well. Despite the forecast, it was looking like the sun was going to stay out for the duration of the day and everyone was quite excited to get some good laps in.

In the second session, I came out and began circulating as normal. There was quite a bit of traffic to go through, which was making it a little difficult to get a rhythm going. I was also trying to take it easy on the rear slick because I wanted to try to make it last through the weekend if possible. I was still managing to go around people on exits as well as on the brakes going into corners. When it seemed like the session was nearly over, I saw some clear track. I estimated we'd have about 2 laps left before checkered and started to think about what to work on next. I finished the lap and came around on the front straight, still without much of a plan. As I was contemplating my next move, the front straight came and went and so did my reference point for where I should have been on entry into turn 1. By the time I woke up from my beauty sleep, I realized I was going into 1 way too tight, which normally is not too much of a problem. Unfortunately, turn 1 at NHIS is a kind of a funnel, which starts out quite wide and narrows considerably at the apex. It is so narrow at that point in fact that it makes it pretty difficult to widen your line without running out of track on the outside. I thought about standing up the bike, but decided against it and to just rail through, figuring I'd get away with putting the tires on the inside curbing as I've done before in other places.

As it turns out, turn 1 has a lip of extra pavement instead of curbing or a rumble strip. And even more unfortunately, the lip of extra pavement ended somewhat abruptly -- it was primarily meant for putting your knee on it rather than being ridden over. By the time I saw that part of it approaching me at between 80 and 100 mph, I started to have doubts about the whole "railing through it" idea, but time was not on my side, and the next thing I was looking at was ground-sky-ground-sky.

Stupidity would is too small a word to describe throwing a perfectly good motorcycle away after less than 20 laps for no reason other than inattention. Upon ascertaining that I appeared to be okay physically, I looked at the bike, which mercifully did not seem to have sustained that much damage at first glance. It failed to turn on however and I rolled it into the pits in shame. Upon further examination, the damage was as follows:
In addition, my glasses were missing the left lense. I went to the crash site during lunch to try to find it, but to no avail. I decided to park the bike for the day and monitor myself for any signs of concussion, which normally are memory loss, disorentation, nausea, and headaches. Aside from a very mild headache, there were none and I was causiously optimistic. At that point my plan was to go to the local Wal-Mart and see if I could have something done about my glasses in the optometry department, bend the rim straight and tape up the rest of the bike and do the races. Unfortunately, luck was not on my side from that point on. Wal-Mart could only schedule me for an appointment the following morning, which was gonna be during practice. I did it, since I had no choice. Even if I didn't race, I'd still have to drive home. The worst though was that despite my and Hauk's (my pit neighbor) efforts with a 3 lb hammer, the rim was not straightened out sufficiently for the bike to be safe. My spare rim turned out to be in an even worse shape. All I could do was pack up and go home. Sometimes it just ain't your day.

Despite the short outing, I did learn some lessons, mainly having to do with gear. Here are some pictures of the damage: 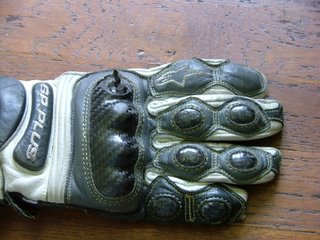 This one kinda brought it home for me. I've never seen kevlar protection worn completely through like that before. 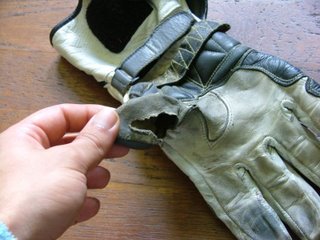 This was the only piece of damage I was unhappy with. The glove ripped and caused some road rash on my thumb. Considering the energy of the crash, aching ribs and a huge bruise on my hip, it's not too bad overall. 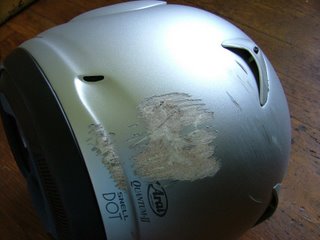 This is the most interesting one, I think. Considering recent controversy regarding SNELL and DOT standards, I'd look at this one as evidence of SNELL's double impact test's validity. You can clearly see impact marks in at least 2 direction over the same area.


Ironically, while I was at the track getting my self-induced beat down, a couple of full-scale pictures from the season opener arrived from Owens Racing Photos: 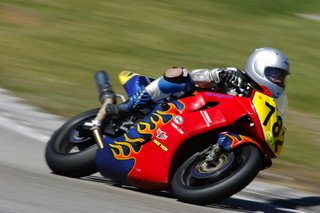 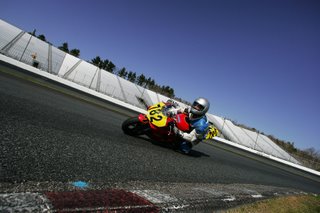 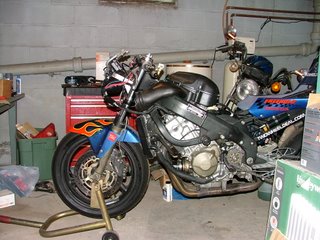 Getting Ready for Loudon Classic
After a bit of a break and sitting out the May 14-15 event, most everything is ready for the 3rd round of LRRS. I'm pretty happy that I skipped the previous round because, as it turned out, Loudon got over 6 inches of rain and the paddock had to be evacuated early Sunday morning due to flooding.

Due to some confusion with my license, I'm going to be running as a novice. I guess my times consistently good enough to be near the front of the amature field and the results from the previous round didn't make up for my midpack finishes on the EX500 against SV650's and spotty attendence in California. The plan now is to put my head down, hopefully get some steady good results and bump back up to amatures ASAP. This is a bit of a bummer because Loudon Classic is the only round on the LRRS schedule, where amatures and experts get to really "strut their stuff" on Sunday with longer races in place of sprints and even a timed practice used for qualifying for the middleweight supersport race. But that's not going to happen for me this year and I instead I will have to settle for the races on Friday and Saturday as follows (my races marked in red):

The weather forecast doesn't look too promising with showers on Thursday and scattered showers on Friday, but Saturday looks clear for now. It might work out if I can get some dry and wet track time during Thursday practice and develop at least a ballpark wet setup. Who woulda thunk I'd ever be hoping for wet practice?

My friend Aron (the vintage Duc guy) is planning on racing this very weekend, including the Monday road race (closed public roads). Wish I could make it, as it's guaranteed to be an awesome show, but it doesn't look like I'll be able to. Aron, good luck, bud!  ¶ 10:44 AM