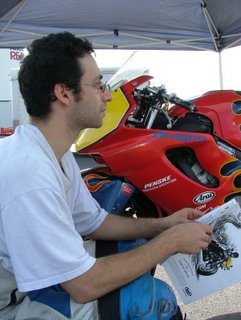 I'm back. I realize it's been a really long time since I updated this log, but that's okay. Here's a quick update.

Alix & I moved to upstate NY and got a house. That pretty much dictated the schedule and budget for 2005. Before leaving San Francisco, I had a terrible race weekend at Buttonwillow. Things went about as bad as they could have without crashing or breaking anything. Due to my and CCS' problems, I managed to miss both practice runs in the morning and had to scrub in a new set of slicks by doing figure-8's in the pits. If that wasn't enough, I had 2 races for the whole Sunday and I managed to have to pull out of the first due to a clip-on coming loose. So essentially I just had 1 race (last of the day) with no practice.

I managed to make a couple of spots off the start, but immediately, the bike didn't feel right, particularly on corner entry. It felt like I was wrestling with a bear. This slow turn-in was exascurbated by the fact that Buttonwillow has a number of high speed flat out (on a lightweight bike) sweepers, where nimble transitions are key. After a few laps, I began to feel drained started to get arm pump, which made braking very difficult. That quickly led to me runinng off track on the corner leading to the front straight. I saw a few bikes go by and I tried my best to get back in the chase ASAP. Turned out, it was the penultimate lap and I now only had one go-around. I thought of backing off a little and letting my body regroup for a final push, but there was no time. I had to push now. Unfortunately that strategy didn't pay off and I only felt worse. By the time I was facing the last corner (same one I ran off the track at the lap before), I wasn't sure what to expect. Sure enough, when I pulled the brake lever, arm pump kicked in like never before and I just kept on coasting not shaving any real speed. I grabbed the lever with all my fingers, but it was too late -- I was off the track yet again. More bikes went by. All I could do was gather it back up and roll across the finish line. I think I finished next to last, I don't even remember. My 2 podiums and other strong finishes felt like they were in another lifetime. The only good thing was that the new motor ran real strong.

After that disaster, I only had 1 outing scheduled before the move: a trackday at Thunderhill. As if Buttonwillow wasn't enough, Thunderhill was even worse. First it got rescheduled due to some light rain in the morning, which was enough to get the majority of riders to vote to reschedule. Great. When I got there the second time, Alix was with me and everything seemed to be okay. I was feeling good, the sun was out, spirits were up. But as though gods didn't want me to ride in California anymore, the bike lost compression in both cylinders while I was warming it up in the morning. I didn't even get to do a single lap! After tearing into it as much as possible under the circumstances, I had to pack up and go home. It still kills me to think about those 2 days.

After all that drama, we did our move, which was enough of a drama on its own merits. The GS was sold and we crated and shipped the 2 EX's as well as the extra motor. After we got situated, I used the street EX for transportation over the summer, which was kinda fun. The big change happened when Alix finally convinced me to get some proper equipment for once: I bought a 2001 CBR 600F4i racebike and a bunch of spares from eBay. I had already made the decision to sit 2005 season out, but I figured it'd be good to get on the track with the new bike at least once, if only to see how I was physically riding a 600 and if there'd be any issues with the bike itself.

We ended up doing a trackday at Pocono with Team Promotion. I remembered those guys being a seriously small-time operation before I had moved to California and boy have they grown! Finally, the luck had changed a bit for me. We had a pretty smooth day out: bike worked quite good, I got up to speed by lunch and was able to ride with the fast guys the rest of the day. Granted, it was just a track day and I was feeling some fatigue at the end of the sessions when I dialed up the pace, but I knew there were no major issues -- nothing some training couldn't take care of. So all in all, the bike proved to be a lot easier to ride than I expected and my "purely mathematical ballpark" setup was fine. The only thing I didn't get to do much of was late braking and hard corner entries. That was in part due to the flowing and flat nature of the track and in part because they combined the fast and the intermediate groups into one (not enough fast group riders) and made everyone abide by the intermediate group rules, which did not allow inside passing. In fact, we came home with a bit of a chicken strip on the front slick. But the few hard entries I did do on it into the 2nd gear hairpin were good. The bike was stable and the stock brakes felt as good as the EBC oversize rotors I had on my F3. Here's a pic of the new bike in action at Pocono: 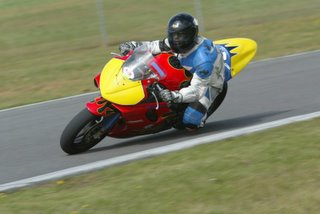 Well, that about covers it. I'll try to stay on the ball and update this log more frequently. Just got my renewed CCS license -- they still had my old 782 number, so I'm stoked!  ¶ 12:17 PM